Gran Canaria is known as the continent in miniature for it's diversity, a physical diversity that couldn't be achieved without such a varied climate. The south of the island is officially a desert most of the time (receiving less than 250 millimetres of rainfall in a year) and enjoying the hottest temperatures. 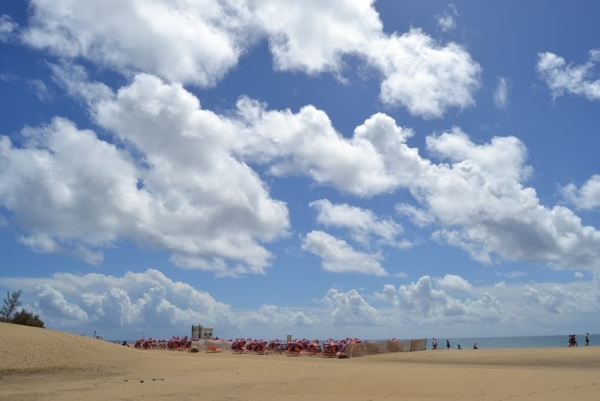 It's in the south that you'll find the most golden beaches, the tourist resorts and very little else. Very arid landscape and the high price of land (thanks to tourism) means no large residential areas. In fact most of the tourist resorts have a residential section though you will find the odd village here and there you won't find much history or culture in the south.

The east of the island also hot but also very windy, so much so that wind farms there are able to provide 20% of the power that the surrounding area receives. The cost of land is much cheaper here and the terrain flat so there are quite a few large and established (historic) residential areas/towns including the island's second city "Telde". Both the south and the eastern parts of the island get their weather coming in over from the Sahara.

The north of the island is known for having arguably the best climate in the world according to several international studies with an average temperature of 22C (dropping to an average 16C in winter and rising to 26C in the summer) it's rarely too hot, rarely too cold. The 500 year-old capital of Las Palmas is in the north and along the north coast some of the larger and more historic towns.

The west but particularly the center of the island is hit by fresh trade winds coming in from the Atlantic bringing with it rain so that's the wettest part of the island. The terrain is very rugged and there are no dual carriageways or motorways as almost the entire west coast and center of the island is protected bio-spear / national parks so expect to see cultivated land on the west and unspoilt nature in the center including lakes, forests and historic Canarian villages. The center reaches a height of 1900 meters above sea level.

In the middle of winter, temperatures in the center could be as low as 5C with snow and ice whilst down in the south people are soaking up the sun on the beach with temps of 25C and in the north it could be raining and 16C.

If you've been checking weather reports recently to see what your holiday weather might be like and are finding the results a little surprising, much cooler than you thought or raining even then bear in mind the diversity and make sure you're looking at the right area. If you search for "Gran Canaria" then most weather sites will give you the results for Las Palmas, the capital in the north so expect cooler temperatures, cloudy days and in the winter rain. For the weather in the south first try the resort you're going to ie Maspalomas or Puerto Rico and if nothing comes up then check the area where they are which would be San Bartolome de Tirajana (Maspalomas, San Agustin & Playa del Ingles) or Mogan (Puerto Rico, Amadores and of course Mogan itself.)

In the summer and from around May until October a regular day should see daytime temperatures reach around 30C and night time a mild 23C. About once a month though, sometimes twice we get a Calima which is a hot front drifting over from the Sahara usually bringing with it floating sand. They last for 2 or 3 days and temperatures rise to around 40C or more by day and the high 20s by night (54C is the highest I've seen by day with 34C at night).

Sun factor on a regular day is between 10 and 15 depending on your skin with a break recommended for a swim/shade/liquids every 20 minutes. Sea temperature is a chilly 18C in the winter and a perfect 22-24C during the summer.