So here's a roundup of some of the news here during the last month. Well the main gossip at the moment is about an incident yesterday just 20 meters from the shoreline of Risco Verde in Arinaga where a 38 year old Spanish woman was attacked by a shark! 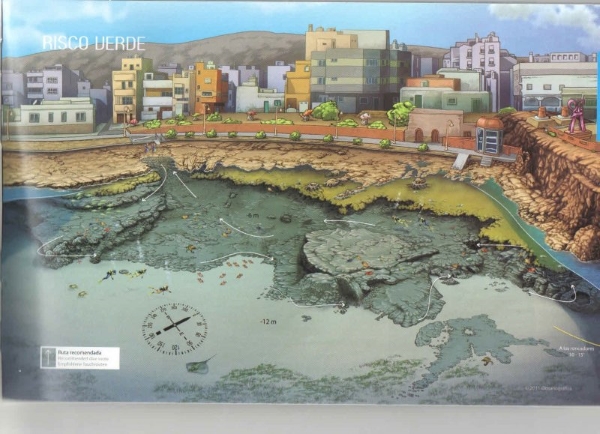 This particular area is popular for snorkling and scuba diving (the victim herself a diver) and the divers are often looking for sharks though Angel sharks; it's believed that this particular shark was a Silky shark. One has never been seen so close to shore before and we're assured by the experts that this is an isolated incident, perhaps due to the rising temperatures in general added to the current weather - winds and calima. If you're wondering if the waters around the island are safe to swim, remember this is the first incident of it's kind ever reported. More info here http://elpais.com/elpais/2015/12/29/inenglish/1451403064_927880.html

If you haven't read about the boost in tourism not only in the Canary Islands but all over Spain then you won't be aware that records are being broken almost on a daily basis. We're 20% up on last year and every month sees more tourism than the last and currently accross the country as a whole, more tourists are visiting these past months than ever before in Spain's history. Tourism figures are matching those prior to the crisis with people spending more than ever, hotels fully booked, airports busier than ever, more people arriving each month than ever before. Whilst this is obviously due to safety issues in once populart destinations such as Egypt, Tunisia and Turkey, the forecast for 2016 is even better still.

Anfi now has 800,000 government euros to go towards one of its projects and more importantly official permission to modify, improve and extend the promenade (paseo maritimo) that runs from Anfi to the far end of Arguineguin. They've been waiting for approval since 1997! Total cost is estimated at around 11 million euros though I am sure we will see lots of Anfi owned premises along the way.

Siam park construction is due to start next month and by the end of 2017 could be open for business. It's being built on the wasteland located between Corona Roja and the GC1 motorway and will occupy all the space you see there down towards Los Salmones apart from a block at the southern end which will see a new 4 or 5 star, 6 story hotel being built. The water park will be the largest of its kind in Europe. If you've seen the Siam Park in Tenerife this aims to be bigger and more spectacular.

After surviving the worst rains in over 50 years during October with some northern villages and beaches being destroyed and an estimated 35 million euros needed for repairs, we then experienced the hottest and dryest November in over 20 years. We're currently enjoying a "calima" which sees temperatures heading towards 30C during the day.

Did you see the Danny MacAskill video of Las Palmas?