Carnival season here on Gran Canaria lasts for around two months, beginning with the largest carnival on the island in Las Palmas and ending with one of the smaller carnivals in the south of the island. Almost all of the major towns around the island has their own carnival, some just one or two days of celebrations and others such as Maspalomas (second largest carnival) lasting for over a week.

The highlight of each carnival is the main parade where floats (lorries and buses decorated in a particular theme) drive down the main high street boarded by and surrounded by crowds of people in fancy dress. As the parade finishes there's then an all-night party until the early hours of the following morning. 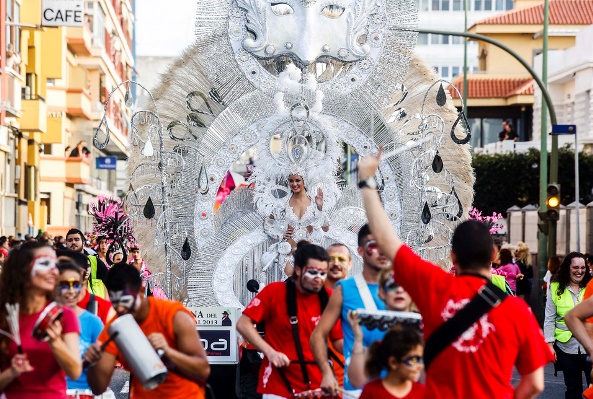 On the main day(s) the crowds that attend are nearly all in fancy dress and for the main party at night you'll be hard to find anyone amongst the crowds of thousands that isn't; everyone here really does get into the carnival mood. All that usually takes place on Saturday afternoon and evening then the day after is the burial of the sardine! The sardine represents the carnival which has died, for this year at least. A giant papermache Sardine usually on top of a lorry is paraded through the streets to a place where it can be burried. Coastal towns will take it to the beach to be burnt then buried whilst other towns will have a bonfire all followed by fireworks and of course a night-tiome party afterwards.

Some of the larger carnivals (Las Palmas, Maspalomas, Telde ...) first have evenings dedicated to electing their carnival queen (one of which pictured above) and carnival "drag queen" which are highly recommended nights out to see stunning costumes and in the case of the drag queen an entertaining show of music and dance. Check out last year's carnival drag queen on youtube As you'll see from the video, the drag queen starts out in a huge and spectacular costume in which it's almost impossible to move but this breaks down until the contestant is wearing little more than a liatard, crazy head-dress and 20 inch or more platform shoes in which they then have to dance and do acrobatics. The carnival queen has an equally tough job. Her costume is usually 4 or 5 meters tall and wide, weighs anything from 30 kilos upwards and the head-dress can also weigh several kilos and be a meter or more in height. The idea is to walk elegantly around the stage with a crazed smile on her face.

Each of the carnivals also has a special day for kids and Las Palmas has a host of other competition days including body painting, a day for the grandmothers, special choirs and even a day for dressing up dogs, to name a few.