I knew it was good for putting on sunburn and that was about it. I've since been reading up on it and after various emails I've been sent, decided to share what little I've learnt as you can actually buy dozens of variations of aloe vera gel here, a lot more potent than you're likely to find anywhere else, along with pure 100% gel. Along with cacti it actually grows as a weed here so very easy for the locals to cultivate. 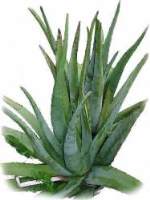 It's been known throughout history to have medicinal properties, used to cure various ailments and nowadays, the myths surrounding it that go back 5,000 years to the ancient Chinese, Egyptians and Greeks are no longer myths but medical fact. Scientists have found that the Aloe Vera gel is a mixture of antibiotic, astringent, coagulating agent, pain inhibitor, cell growth stimulator and scar inhibitor. It contains a total of 70 "essential ingredients" including most vitamins including B12, minerals, enzymes, protein and amino acids. What does all that mean you wonder - it's good for sunburn!!

"Tests conducted on ulcer patients in Florida in 1962, as reported in the Journal A.O.A., Vol. 62, April 1963, showed that the clinical administration of Aloe Vera gel emulsion resulted in permanent relief for 94% of ulcer patients who had had the condition for an extended period of time."

Enough of the technical stuff. Bearing in mind that most medicines come from plants anyway, aloe vera is a fairly unique plant in that with little processing, it's "gel" is a natural medicine for helping to cure almost any skin ailment from sunburn (told you so) and other burns, rashes, wounds, acne, stings, cold sores, insect bites, arthritis and even as an anti-ageing cream. You can even buy it in a form which can be drunk and is used to help against asthma, insomnia, indigestion, heartburn, constipation, hemorrhoids and ulcers to name but a few.

Something really spooky, the plant's gel not only helps to heal scars and damaged skin tissue but it can also heal itself! The leaves have no stalks or woody parts and are kept upright by the water pressure of the gel. A leaf, slashed across with a sharp knife, first spurts out its "lifeblood" as the flesh on its leaf is opened. A few seconds later the wound films over. The next few minutes a rubber-like, protective coating effectively seals off loss of water. In a short time, the wound heals completely. The plant contains a wound healing substance that does this.

Do a search on the Internet and you'll find reference to hundreds and hundreds of books, medical papers and research documents (well, I did).

Aloe Vera is non toxic - it is not a drug - it is not a medicine - and is not intended to replace any drugs or medicine but documents and experiences show that when people use a product or drink the juice for whatever reason - it works!

If you want to try it out, go see Rafael down by the main entrance to the main beach in Puerto Rico. If you tell him Owen sent you and everyone does that, eventually he'll do a discount. Rates aren't discounted yet for us, I'll tell you when but tell him I sent you. Anyway, he's there every day from late morning until around sunset. Him and his assistant give demonstrations by waiting until the lobster crowd come off the beach and rubbing gel into their shoulders. The stuff does it's own advertising as people are so amazed, they buy the stuff straight away along with anyone watching. 500ml of the pure gel sells for €18 - 1000ml costs €30. Moisturizing cream costs €12, the drinking form of aloe vera is €12 for 250ml, the drinking/medicine (stronger) form is €14 - the list goes on but includes acne cream, hand lotion, anti-ageing cream, spray form and massage lotion to name but a few. Go and try it out for yourselves.